Born in the Serbian capital of Belgrade on the 8th of January 1983, retired goalkeeper Srdjan Djekanović is the first player to play for Canada’s top three clubs (Vancouver Whitecaps, Toronto FC and Montreal Impact). We caught up with Srdjan who took some time to tell us about his new coaching position, his experiences playing in Canada and about the beautiful game through a keeper’s perspective. 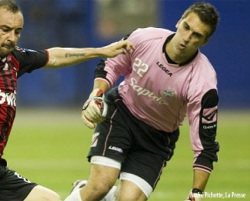 Djuradj Vujcic: In such a large and developed country like Canada, how is it possible that soccer is still categorized as an unpopular sport?

Djuradj Vujcic: You’ve tended goal in the highest rank of Serbian and American/Canadian soccer. How do you compare Serbian soccer with the soccer played here?

Srdjan Djekanovic: I played two years in our Serbian SuperLiga for Zemun and Radnicki Obrenovac. I also played two years in lower-level leagues for Zmaj (also from Zemun) and Zeleznicar Belgrade. In comparison to Canadian soccer, Serbian soccer is more technical – everyone loves to play but that leads to more mistakes in defense. In Canada and the US, those mistakes are not tolerated and players play surely in their own half. Much more time is spent on tactics. All corner kicks, free kicks – they’re practiced non-stop, you know for sure who stays where and who has what responsibility. While in Serbia, more attention is directed on the play itself rather than the tactics.

Djuradj Vujcic: After Zeleznicar, you move to Canada. Why did you decide on Canada? You moved at a very young age and practically evolved in Canada as a player?

Srdjan Djekanovic: I moved to Vancouver with my parents in 1995 (at the age of 12). Before my arrival in Canada, I played for the youth categories of Zemun. I finished elementary and secondary school in Vancouver and after that, although many doubted in me, I bought a one-way ticket and left back for Serbia – for a try-out at age 18.

First I planned a try-out for Zemun and if that didn’t work out, well… there was no plan B. I prepared for months because I told myself, “they can turn you down for not being good enough but they can’t turn you town for something that’s in your control”, for example physical preparedness. I had to be more prepared and have a work rate twice the size than the rest of the players.

After many hardships, I signed for Zemun in 2001. Coming from Canada, it was twice as hard playing in Serbia with everyone doubting your qualities and the qualities of Canadian soccer. That’s probably one of my proudest moments – leaving by myself (not knowing anyone there) across the pond and playing not for one, but for two teams in the Serbian top division in spite of all doubts – and all this before I turned 22.

Although I enjoyed playing in Serbia and learned many things, I decided to return to Canada. Why? That’s a very good question. There are a number of reasons. Zemun had a very good keeper back then in the form of Djordje Topalović while I was only 18 years old. But I think that the biggest difference is mentality and way of life. Growing up in Canada, I grew accustomed to some norms. It wasn’t normal to me that a club that I work for – playing for them – doesn’t pay me a part of my contract or bonuses that they owe me at the end of the season. Or pay-checks running “late” a few months.

Djuradj Vujcic: Many don’t know that you played for the Canadian national team.

Srdjan Djekanovic: I had two starts for the Canadian national U-20 team and I was on the bench numerous times. I participated in the senior team camp in 2007 while in 2010 I was called up to the senior team for a friendly against Jamaica.

Djuradj Vujcic: There are approximately 100,000 Serbs in Canada. You played in Vancouver and in Toronto. Did you feel a sense of (Serbian) community? Did that help you get used to the North American way of life?

Srdjan Djekanovic: In Vancouver there is a big Serbian community but also in Canada – all around. In the high school that I went to, around me there were about a hundred students from various republics of the former Yugoslavia. Before I arrived in Toronto, I heard there were many Serbs and I enjoyed eating chevaps in Jolly Café. Even with all my things to do, I managed to go to a Serbian party which convinced me of the number of our people in Toronto and the fact that our women are very pretty (chuckles).

Djuradj Vujcic: You debuted for Toronto FC against renowned Benfica. Can you tell us what kind of an experience that was?

Srdjan Djekanovic: I enjoyed playing for Toronto – packed stadium, great fans and atmosphere. I came as a sub and by the end of the season, I played in eight matches with a pretty good record which is an achievement for a club in its first year of existence. Not to mention the number of players who never played together before that year.

An interesting thing that many do not know is that Savo Milosevic was on a try-out with TFC at the end of the 2007 season. It was an honour being on the same field with one of the big legends of Serbian football. My debut against Benfica was unbelievable. I wasn’t expecting to enter the match. Benfica is one of the top European clubs and they had (and still do have) very well-known players that I grew up watching. In 2007 when I played against them, those were players such as Rui Costa and Fabrizio Miccoli. Entering the game at 0-0, I was a bit nervous but Benfica quickly had a big chance – while I made the big save – which helped me calm my nerves and concentrate on the match.

Djuradj Vujcic: You played for Vancouver from 2005 to 2006 and again in 2008. You tended goal against David Beckham and his Los Angeles Galaxy. But you departed once again? At one point it looked as if you were going to sign for Houston?

Srdjan Djekanovic: I played against Beckham while with Vancouver and had a drink with him after the match. It surprised me how down-to-earth he is after everything he achieved in his career. I do have to say that many top athletes I met through sport – Beckham, Savo Milosevic, Rasho Nesterovic, Ronaldinho, Chris Bosh – are all very good people!

In Vancouver, it came to be that there was a disagreement between me and the coach which happens in sports the same way a disagreement happens between manager and worker. As I was finishing my degree at UBC while playing for Vancouver, I didn’t want a trade and decided to take a half-season break from professional soccer and concentrate on my studies. I was in touch with Houston who was MLS champion in 2007 but in the end, a better offer from Montreal made the difference. I’m very happy with the decision I made of moving and playing for the Impact.

Djuradj Vujcic: What are your experiences playing in the now defunct USL-1 and MLS? Were these leagues similar?

Srdjan Djekanovic: MLS and USL-1 were very similar leagues. MLS has the title of Major and that’s why people think it’s the better league. The leagues were of very similar quality and proof of that is that in 2007 and 2008, in the semifinal of the Lamar Hunt U.S. Open Cup, there were two USL-1 and two MLS teams. Montreal (then USL-1) won the Canadian Championship in 2008, beating Toronto (MLS). The reason many players decided on playing in the USL-1 rather than MLS is that the MLS has a salary cap which puts limits on players’ salaries. Many players had larger earnings in USL-1.

Djuradj Vujcic: To finish, please tell me something about your new soccer academy. You retired pretty early at age 27.

Srdjan Djekanovic: My soccer school Primo Sports Soccer Academy is functioning very well for now. That was my idea and dream for a long time ever since my playing days. Finally after a long time organizing all the tiny details and planning, the academy opened January 27th, 2012. The idea was that, through quality training and numerous contacts, we contribute to the progress of ambitious players and goalkeepers alike throughout the region and help them in their search for a professional chance throughout the world. This way we also help them in getting a scholarship at American and Canadian universities. Primo Sports is affiliated with League One’s Carlisle United and also with the agency Associated Sports Management. This link gives our players a chance to go on a try-out with Carlisle (or elsewhere around the world) through an agent who works closely with our academy.

About my retiring young, I wanted to spend more time with my family and friends. But it didn’t really pan out the way I planned as now, as a coach, I spend even more time at practices than when I was playing. But at least not all around America a few times a week but rather, at home in Vancouver with people I love.

In 2010, I found out I had cancer and I played out the rest of the season out of respect to the Montreal Impact and its fans although I could barely wait for the season to finish. I decided long before the end of that lengthy season that that was that. I wanted to spend more time close to people I love and people that mean everything in life.

After the season, I had surgery and now everything is OK but the thought that life is short and unpredictable keeps me in the city where my friends and family are. I love soccer a lot and I owe it a lot but in 2010, I realized and decided that I would much rather spend the night at home with family and buddies instead of chasing a ball in some far away city in front of 20,000 unknown people.