by Djuradj Vujcic
Many Toronto FC fans look back at that first season in 2007 with fond memories. Although a statistically unsuccessful season, it’s that first love that stays with us. Packed stands, positive energy and hope were all present that year. Urban Book Circle recently had the opportunity for a quick chat with Andrea Lombardo, a member of that inaugural season. From 2010 to 2012, he played for Canadian Soccer League side SC Toronto after which he announced his retirement. Lombardo talked to us about his time with TFC, the Canadian youth teams and his plans for the future. 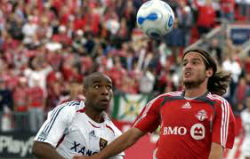 Andrea Lombardo
Djuradj Vujcic: Andrea, you were part of the inaugural Toronto FC squad in 2007. How special was that? Also, do you think that maybe the fans and coaching squad didn't give you a fair chance?

Andrea Lombardo: Being born and raised in Toronto, it was a tremendous honour to be able to be a part of TFC history as a member of the inaugural team. Unfortunately, the way the MLS is set up with its non-guaranteed contracts, a player might not be able to stay with a club and prove himself over a long period of time. In the European system, a guaranteed contract allows you to have some sort of stability, peace of mind and tranquility in not having to worry about showing up one day and being approached with "unfortunately we need your roster spot, thanks for everything." It was often short-term results over long-term player development but that is definitely starting to change now with the Academies being set up.

Djuradj Vujcic: Even before TFC, you went from playing for Woodbridge and North York Hearts to playing for Atalanta and Perugia! How did you get in touch with them and how much of an impact did this experience make on your career/life?

Andrea Lombardo: It was actually a very long shot but my dad's friend here in Toronto had a brother who lived in Bergamo who coached a youth team affiliated with Atalanta. They offered me a two-day trial on a Monday-Tuesday so my father and I flew over and spent money on flights just for a two-day trial. I impressed, after which they said they have an off-day Wednesday but to come back on Thursday for a scrimmage against the team a year older than us. In that scrimmage I ended up scoring two goals and immediately after training they told me they wanted to sign me for next season. I came back to Toronto, got my stuff together and two weeks later I moved into their player dorms. Sometimes it's all about timing and seizing your opportunity when it's given to you; not only in soccer but for anything in life. The experience I had in Italy shaped me greatly as it was a completely different breed of football from what I was used to here in Toronto. It was no longer "I have too much homework so I can't go to training tonight." Football is religion over there and that was the one thing that surprised and impacted me the most.

Djuradj Vujcic: Did you play for the Whittlesea Zebras in 2009 or was that another Andrea Lombardo?

Andrea Lombardo: I did not play for Whittlesea Zebras.

Djuradj Vujcic: What are your plans now that you are done your footballing career? Do you maybe plan on going back to it one day in some shape or form?

Andrea Lombardo: Since I moved on from football, I enrolled at York University and obtained my degree in Communication Studies. I will also be starting a Masters in Education part-time this fall so I'm very much focused on my work life as well as academia. I don't have any plans to go back to soccer.

Djuradj Vujcic: If you could choose one reason to describe why you retired early, what would it be?

Andrea Lombardo: Once I was released from TFC, I wasn't able to find a contract with any other teams in MLS or in the then A-league. I wasn't even able to find a trial with anyone, which I found quite odd due to the fact that I had played in many games in the MLS as well as Internationally for the Canadian youth teams. At that point, my youth coach Carmine Isacco offered me the opportunity to enroll at York and play with the Lions while studying. I took the opportunity and haven't looked back since.

Djuradj Vujcic: Can you compare the youth sides you played on (U17, U20 and U23) to the youth programs we have today? Has there been an advancement in our youth program?

Andrea Lombardo: In terms of advancement with the Canadian youth sides, I can't really speak to that as I haven't been following them much. As for advancement with the youth programs in general, I think we are definitely on the right track. I only wish I would have had a TFC, Impact or Whitecaps academy when I was growing up. It's important to instill in our youth discipline and professionalism at a young age when dealing with their football careers. It takes a lot of sacrifice, determination, dedication and professionalism to be able to make a career out of the game and I think guys like Danny Dichio at TFC Academy, just for one example, are able to show these kids the ropes and what it takes.

The Brazil series as well as both U20 World Cups are definitely memories I will hold on to forever. Everything the Canadian program offered me from travel around the world to friends I made along the way, I am eternally grateful to them.

Djuradj Vujcic: What would you suggest to young talented players pursuing a soccer career in Canada today?

Andrea Lombardo: I would suggest to not take it lightly. Although people think it's easy to make it, it's not and once you make it, it takes that much more work to stay at that level. Work hard every single day and think about how quickly it could all come to an end. Put the work in and you will be rewarded.
________________
Interview with Andrea Lombardo by Djuradj Vujcic