I ADORE THIS GAME

It’s not every day that you get to talk some footy with one of your childhood sports heroes. Naturally, when said opportunity is given, you jump on it and run with it. Here, I sit down with Veljko Paunovic for a quick chat. Veljko’s soccer career (most notably with Atlético Madrid but also including numerous other La Liga clubs) is a product of his endeared club’s (Partizan Belgrade) youth school.

Paunovic retired from soccer in 2008 – ending his career where he had wished. In a black-and-white Partizan jersey. Three years later however, he came out of retirement for a surprise comeback with the Philadelphia Union. He retired at the end of that 2011 season. With his playing career now officially over, what does the future hold for the “Serb of Ben”? 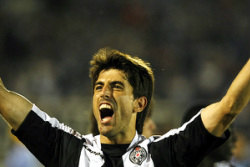 Djuradj Vujcic: In 1978, your father – Partizan Belgrade legend Blagoje Paunovic – played in the old North American Soccer League for the Oakland Stompers (under the alias of Paki Paunovich). Did he ever talk to you about those days?

Veljko Paunovic: That’s right, my father played for the Oakland Stompers near the end of his career and he talked to me a lot about that experience – he was very satisfied and happy in the States. He made an impact on my decision to try a similar experience in the MLS.

Djuradj Vujcic: In 2009, you went on a tryout with the New York Red Bulls and were very close to signing but you turned down a one-year offer. How come?

Veljko Paunovic: I really wanted to play for a MLS side and I agreed to go on a tryout with the Red Bulls then. Such a decision in Europe however isn’t really a popular thing to do especially when a player such as me who has vast, top-level international experience is in question. I passed the try-out successfully but when we began talks about the terms and certain aspects, I simply felt that something in the sports ambient of the club (at that time) wasn’t to my taste and I turned the offer down although I did of course see that the club in question is an excellent club with a lot of potential

Djuradj Vujcic: So how did it come to be that you made a comeback?

Veljko Paunovic: I had my first talks in the league headquarters last year (at the Fifth Avenue MLS office) with Peter Nowak who was preparing the roster for the upcoming season. Ever since the Union franchise was up and running, I was immediately impressed. I was also immediately impressed with what we talked about and believe me, there weren’t any financial talks – not even for a moment. I wanted a sports project and motive that would completely fulfill me. From that first moment, I knew that I would fit in well with the Union.

Djuradj Vujcic: You were (and still are) a fan favourite in Philly, which says a lot about how well you played. In only the second year of the club’s existence, you were a leader on the field. Why did you retire again?

Veljko Paunovic: It was very nice in Philadelphia and I’ll never forget that experience. The supporters, team management and of course my team-mates, coaches – the whole city really. Everything was at a top level and to be honest, it was very tough for me to make that decision and I can tell you that I would have loved for the circumstances to be different, with me still being active at PPL Park. I always gave all of myself on the field and even off the field for the Union and I’m happy that people knew to respect that and to respect me. I’ll always be thankful to the Philadelphia Union for the time and attitude they had towards me. The reasons I retired for a second time were again of a familial nature.

Djuradj Vujcic: You’ve played as a striker and as an offensive mid. Which position did you prefer?

Veljko Paunovic: I’ve always been, how we say in soccer, a polyvalent offensive player which means that I could play various positions in attack and midfield. Personally, I liked every role because I adore this game and I think I interpret the game very well in every role my coach gives me. I feel that it’s very important that, as a player, you realize that you’re the coach’s soldier. Also, it’s important that as your talent permits, you give everything of yourself for the club and that you do that with your own identity. It’s important that you fulfill all of what is asked of you and you add a little something on top of that. Sometimes you succeed in that and sometimes you don’t but it’s important that you have that attitude in every match and every practice.

Djuradj Vujcic: Radomir Antic, whom I have tremendous respect for both as a soccer legend and as a human being, has coached you numerous times throughout your career. Can you tell us a little about Antic?

Veljko Paunovic: Antic is a man of soccer – 100%. He lives and works all for soccer and coaching. He currently works for the most frequented Spanish radio station known as la COPE where he’s a colour commentator for Spanish league matches and Champions League matches, among other leagues. I learned a lot from him and he made a great impact on my career.

Djuradj Vujcic: How many times have you visited Toronto and Canada in general? Partizan was close to visiting Toronto last May for a friendly against Toronto FC. What are your thoughts on this potential spectacle?

Veljko Paunovic: I haven’t been to Toronto although I really wanted to visit this awesome and worldly metropolis. All of my friends who’ve been to Toronto told me great things. They say that the city is beautiful, secure, clean and that people are very friendly and that there’s a great ambient on the streets. I’ve been to Vancouver and I was wowed by the nature and as I just mentioned, the city itself, its security, ambient and people. I heard that there are many Serbs in Toronto. It’d be a great idea for Partizan to begin working on spreading their brand overseas a bit and to visit Canada and to organize a nice sporting event in this country. I think that for our people, for people of our descent and for Canadians too, this would be a huge event.

Djuradj Vujcic: Life after the playing career – what do you have planned?

Veljko Paunovic: I have completed my UEFA Pro coaching license which is equal to the first level of FIFA coaching organizations and it’s my wish to become a coach. That’s always been my wish – I have huge aspirations for that. I’m currently visiting the best coaches in the world and if they’re active, I follow their work and methodology and if they’re currently without a club, I speak with them. Either way, I learn from them. I’m using this period of time in my life to prepare myself as much as possible to be ready for the moment when I get a chance. Although, I do feel that it’s best for a coach – especially a young one like me – to work but there’s time for everything!

Djuradj Vujcic: Thanks Veljko! You’re a good and honourable person. I wish you the best in your coaching career.