Stephen Ademolu
A New Beginning
The reason why I started playing soccer was because it was just fun! I loved the fact that it didn’t come easy and I was always learning new things. I was good in football and basketball. I actually had scholarship offers for those sports but soccer was just different in my eyes. So it was only fitting that I eventually ended up becoming a professional soccer player. While I was playing, you can ask anyone, I enjoyed every minute being on that field. Everyone loved the fact that I’m smiling and having fun. I believe that’s why most of the kids love me in Europe because I had fun. The kids should see it’s tough but it can also be so much fun. Why not smile at a ball boy who looks up to you or tell him “watch this goal” and end up scoring? This is one of the reasons why I wanted to start the Ademolu Soccer Academy because I believe that the kids need to have fun but they also need to learn from a professional soccer player that did a lot of good things on and off the field. I’m from Windsor and I should give back to my local clubs that gave me the opportunity to do what I do. I believe all kids should have role models and I hope they will even say, “I want to go to Ademolu Soccer Academy because I learn so much and it’s so much fun.”

The topic of my column today is about my soccer academy. I have been planning this academy since I ruptured my achilles in 2010. Now, four years later, I can finally say that all the hard work I put in is going to pay off. It’s not that I want to do this academy. It’s that I believe I need to do it to help the kids throughout Ontario with the skills that Europe taught me. I learned so much from all the training camps in different countries that my brain is overloaded with different training drills. I have seen training sessions of top teams in Spain, Turkey, Belgium, France, Italy, Switzerland, Argentina and I could go on and on but you get the point. Sometimes I say this as a joke to people but I have seen more than you can imagine. Even in these countries my friends would think I’m crazy because I would walk around with a hotel notepad and write down some of the trainings I might see a team do. They would laugh but I was always saying in my head, “I’m going to teach the kids these things with a touch of my style and make a superstar in Windsor – my home town.” My entire professional team knew about the hotel pads and how boring pre-season can get but I made it a bit interesting, I have to say. While working on this academy I realized there are a lot of politics in soccer even in local soccer clubs. With this academy, all I am doing is fine-tuning the kids and giving them back to their local clubs polished and improved. It’s like a car and I’m just the repair person who is going to align the wheels, give the car a tune-up, put some air in the tires, give the inside of the car a good cleaning so it looks and feels brand new and runs better.

· Ademolu Soccer Academy logo courtesy of Stephen Ademolu ·
This academy has really been a journey – I mean from trying to figure out how to make a logo to the motto of the academy. If you want to know what it is and know more about the academy you just should go to the website. Even how I wanted the font for my website, to what I want on the background on my Facebook page, I learned so much. I really enjoyed the website but the pricing of the academy always sucks because everyone wants everything cheap but sometimes quality costs a bit of money. We don’t want a quantity of coaches with less experience we want quality coaches. It is great that we have parents as coaches because they are taking the initiative to at least try and learn how to coach, so that can never be faulted. I’m just starting to go to schools and give them my player card with all my achievements on it and to see these kids smile is priceless. They are so excited and can’t believe that I played soccer in all these countries. The problem is they never knew but that’s where I come in and I make the kids understand that they can be just like me in many ways. They can go on and get a scholarship whether it’s academic or sports. They can also turn professional in soccer or another career away from sports; they just have to work hard and never give up. I’m trying to instill in these children that they can look to me now as a role model and I do it with a big smile on my face. In Tromso, I would talk to our Sports Director and just randomly ask him questions about marketing and just business questions. Now, because I did all that, I know a lot more than I maybe should but it’s a great thing to know, let me tell you. 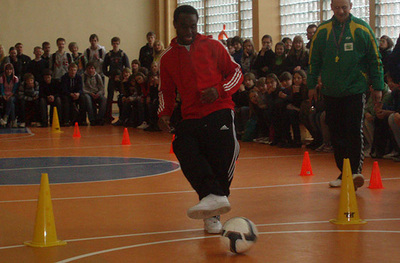 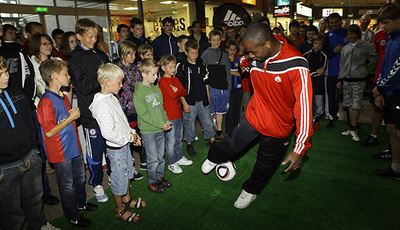 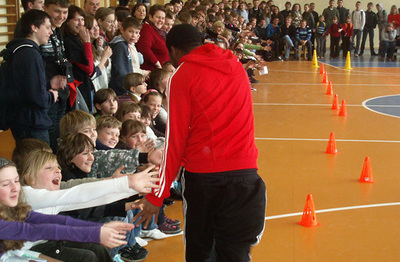 · Photos courtesy of Stephen Ademolu ·
My academy is going to help kids in my local area and Ontario understand what it takes to become a professional athlete and what it takes academically to receive a sports scholarship. A goal of mine for the academy members is to get them scholarships so that their parents don’t have to pay $40,000 or more for a semester. Just think about it, if the parents invest in me and their child trains with me at least three times a week and we watch soccer together and analyze the game – what do you think this child will become? I’m trying to rub off on these kids as much as possible but I am not trying to overload their heads. I’m not going to tell a kid that they can become a professional soccer player and that it’s easy. It is not easy. Trust me. So what I will tell the kids is this: listen, school is very important in being an athlete and if you can excel in both of them you are more likely to catch the eye of a D1 school in USA and get that full-ride scholarship. After four years of free education, if you’re ready to move on and turn professional so be it, but if you can’t then guess what? You just got a degree for playing a sport you love and you can now move on to a new career. So the goal of the academy is to help children build the skills and help guide them academically to their highest potential so that they can have the opportunity to go play soccer in the USA, while getting their school paid for and after that it’s up to them. 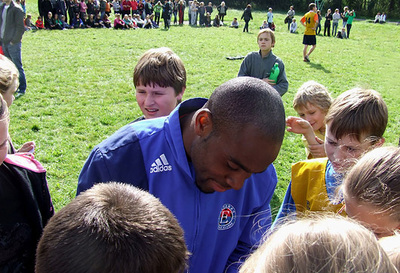 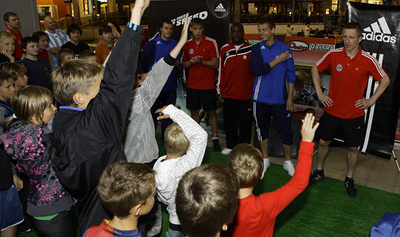 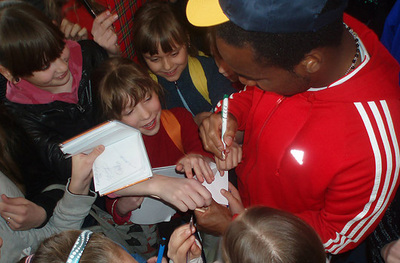 · Photos courtesy of Stephen Ademolu ·
My motto for the academy is Leave Your Mark. Why do I say leave your mark? I say it because that’s what we want our children to do. They are our future and we want them to have a positive influence in the community and let people remember their names for the good work they have done. I really hope I can get as many kids as possible to join this academy. It will change Windsor soccer first, then the rest of Ontario. I am not only a good soccer player, I’m a good coach. I was taught by my coach who coached me in Tromso. He played for AC Milan. The first few days I was there, he said to me, “Stephen, it’s all about the details.” Now this guy played against the real Ronaldo and played for AC MILAN (!) so yes, I’m going to listen to him. I played against Philippe Mexès and (in an interesting accent) he said to me “someone taught you very well.” Those two comments helped me a lot. I want to teach the kids in Windsor about my career and help them become better than me. By concentrating on details, encouraging kids and also being realistic with them about the game, I can make this happen. I told my friend that I really want to help a kid become better than me. They said, “hahaha, yeah right, that would drive you nuts” but I told them that it won’t. It is a very tough thing to do and if they could accomplish that then it would be great to know that I had a hand in helping them play to their full potential.

It’s been four years and I’m so excited that this academy will be starting in January of 2015. I hope everyone can join and we can remember the day that I put my cleats down for a few hours to teach the kids to be better than me. I am here to inspire them and to push their drive to the maximum.
Stephen Ad﻿﻿e﻿﻿molu,
journalist, contributor to the Urban Book Circle
C O M M E N T S
A New Beginning by Stephen Ademolu
· Column & Photographs: Stephen Ademolu / All rights reserved 2014. Copyright © Stephen Ademolu ·
· Canadian flag & sky – Photograph by Canadian journalist Djuradj Vujcic
All rights reserved 2008. Copyright © Djuradj Vujcic ·
· Design & Artwork by Djuradj Vujcic and Prvoslav Vujcic · Illustrated by Sarah Riordan and Deidre McAuliffe ·
· Edited by Djuradj Vujcic, Prvoslav Vujcic, Deidre McAuliffe, Sarah Riordan and Danijela Kovacevic Mikic ·
All rights reserved 2014. Copyright © Urban Book Circle®
C     O     N     T     A     C     T